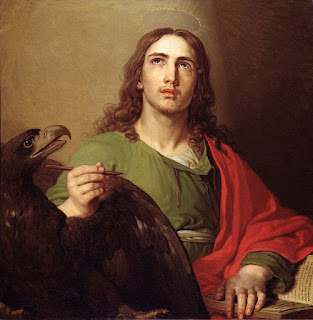 The Feast of Saint John - the Apostle’s Story

It is God who calls; human beings answer.

St. John "the beloved disciple" was a Galilean, son of Zebedee and Salome, and brother to St. James the Greater, The vocation of John and James is stated in the Gospels: Jesus called them; they followed. The absoluteness of their response is indicated by the account. James and John “were in a boat, with their father Zebedee, mending their nets. He called them, and immediately they left their boat and their father and followed him” (Matthew 4:21b-22).

Jesus showed St. John particular instances of kindness and affection above all the rest. He had the happiness to be with Peter and James at the Transfiguration of Christ, and was permitted to witness His agony in the Garden. He was allowed to rest on Our Savior's bosom at the Last Supper, and and the one to whom Jesus gave the exquisite honor of caring for his mother, as John stood beneath the cross. “Woman, behold your son…. Behold, your mother” (John 19:26b, 27b). St. John was the only one of the Apostles who did not forsake the Savior in the hour of His Passion and Death.

In the interval between the Resurrection and the Ascension, John and Peter were together on the Sea of Galilee (John 21:1) having returned to their old calling. When Christ appeared on the shore in the dusk of morning, John was the first to recognize him.

The last words of the Gospel reveal the attachment which existed between Peter and John. It was not enough for Peter to know his own fate, he must learn also something of the future that awaited his friend. “Jesus said to him, ‘If it is my will that he remain until I come, what is that to you? Follow me!’ So the rumour spread in the community that this disciple would not die.” (John 21:22-23)
The Acts show us them still united, entering together as worshippers into the Temple (Acts 3:1).

John was with Peter when the first great miracle after the Resurrection took place—the cure of the man crippled from birth—which led to their spending the night in jail together. The mysterious experience of the Resurrection is perhaps best contained in the words of Acts: “Observing the boldness of Peter and John and perceiving them to be uneducated, ordinary men, they (the questioners) were amazed, and they recognized them as the companions of Jesus” (Acts 4:13).They were fellow-workers together in the first step of Church expansion.

St. John remained for a long time in Jerusalem with the Blessed Mother of our Lord, though tradition of no great antiquity asserts that he took her to Ephesus. When he went to Ephesus is uncertain. He was at Jerusalem fifteen years after Saint Paul's first visit there [Acts 15:6]. There is no trace of his presence there when Saint Paul was at Jerusalem for the last time. In Ephesus, he founded many churches in Asia Minor.

St. John wrote his Gospel after the other Evangelists, about sixty-three years after the Ascension of Christ; also three Epistles, and the mysterious Book of Revelation. He was brought to Rome and, according to tradition, was cast into a caldron of boiling oil by order of Emperor Domitian. The legend of the boiling oil occurs in Tertullian and in Saint Jerome. Like the Three Children in the fiery furnace of Babylon, he was miraculously preserved unhurt.

He was later exiled to labor at the mines on the Island of Patmos where he wrote the Apocalypse, but afterwards returned to Ephesus. In his extreme old age he continued to visit the churches of Asia.
St. Jerome relates that when age and weakness grew upon him so that he was no longer able to preach to the people, he would be carried to the assembly of the faithful by his disciples, with great difficulty; and every time said to his flock only these words: "My dear children, love one another.”

St. John died in peace at Ephesus in the third year of Trajan (as seems to be gathered from Eusebius' history of the Saint); that is, the hundredth of the Christian era, or the sixty-sixth from the crucifixion of Christ, St. John then being about ninety-four years old, according to St. Epiphanus.

Because of the depth of his Gospel, John is usually thought of as the eagle of theology, soaring in high regions that other writers did not enter. John’s is the Gospel of Jesus’ glory. 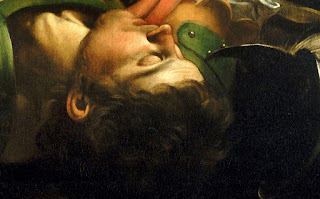 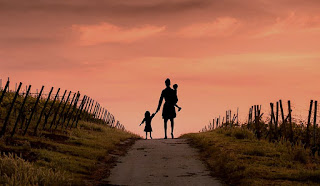